Well after seeing the Network Rail Shed, my customer then showed me a photo of the building I posted at the the end of the last post.

It's the Depot office building, I believe a former coal office and is in a fairly run-down state, just screaming out to be modelled.

Like his Dover Priory signal box, it was to be clad in SE Finecast English Bond plasticard sheet on a foamex substrate.

Like the Shed, plans were drawn up in Illustrator and then output onto 2mm foamex on the vinyl plotter. Likewise, the windows were extracted from the drawings and separately output onto white self adhesive vinyl, before then being stuck to clear pvc.

Next came adding the brick sheet. I stuck this down with pvc pipe adhesive, which seems to work quite well with the flat faces of foamex, then sealed off the edges with a splash or two of MEK. The lintels were then cut out, and a strip of 20thou was let into the hole, being glued in place with more MEK.

I then added a strip of 20thou and 40thou for the window cills, but later replaced them with 40x40 as I thought they looked way too thin.


A foamex roof was added, flush fitted through careful measurement between the gable ends, so that the roof tiles could sit directly on the walls but still have a substantial base to sit on. The 3mm thickness also doubled up for the bargeboards, although I did stick a 3mm plastic strip to the front of this, to enable a better adhesion for the guttering. 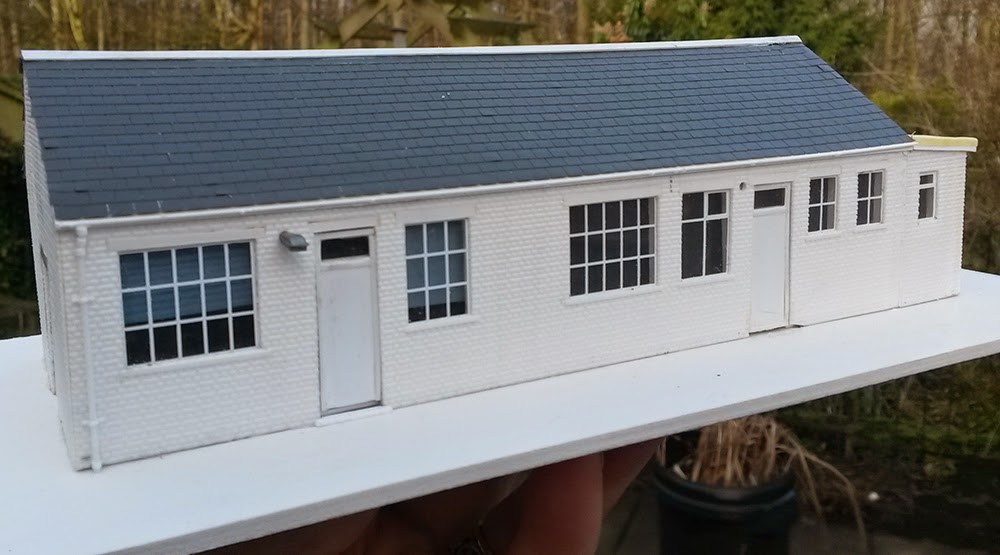 The tiles flew on in about 20 minutes this time, with a new technique I've been trying.
Similar to the York Modelmaking self adhesive tiles, I've made my own from self adhesive vinyl on the vinyl cutter... 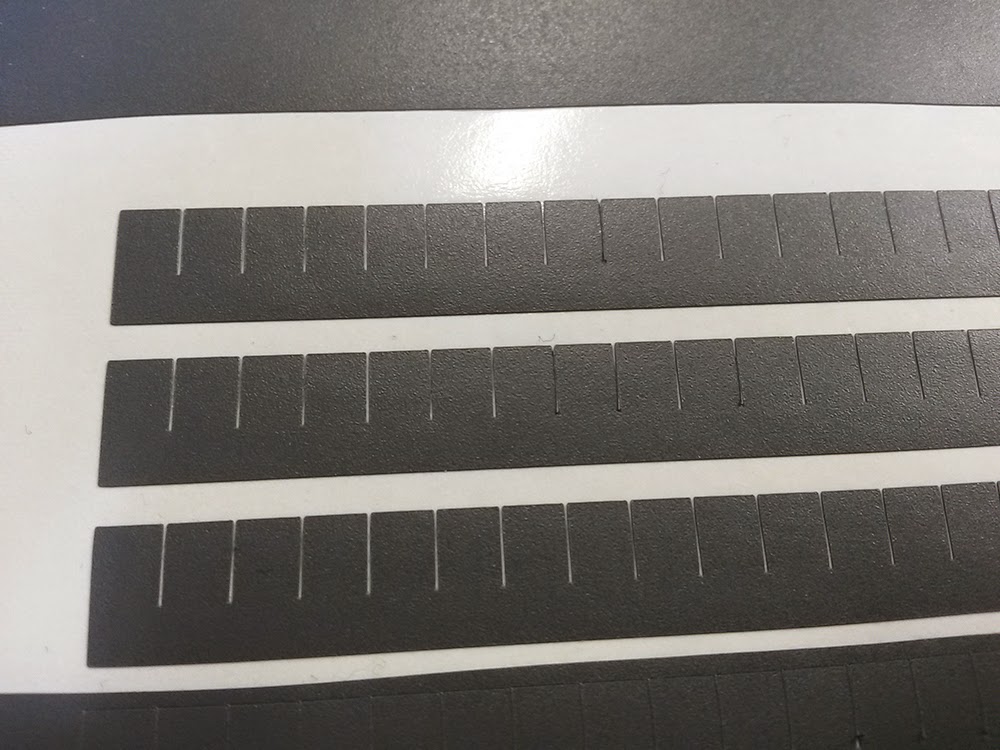 They're really thin and look superb for slate tiles - these ones are measured up as Duchess size. I simply make up a batch, stick down some graph paper to the roof, then start laying rows of slates, overlapping in 3mm increments. Not only does it take about a 100th of the time it takes me to individually tile a building, they look great and take acrylic paint really well. This batch was made from grey, but I was dissatisfied with my painting, and replaced them with black ones, which had the instant advantage of being self-shadowed following a dry brushing of grey.

Anyway, back to the model in hand.

Once roofed, I started adding details such as guttering and downpipes from plastic rod and half-round, fashioning the brackets from thin microstrip, Then came the fun part... On the prototype, the building is covered with electrical wiring, so I started adding this with thin wire, affixing it to the bare  plasticard with MEK. Details such as junction boxes, switches, brackets etc were added with micros tip and small fillets of plasticard, again welded on with MEK 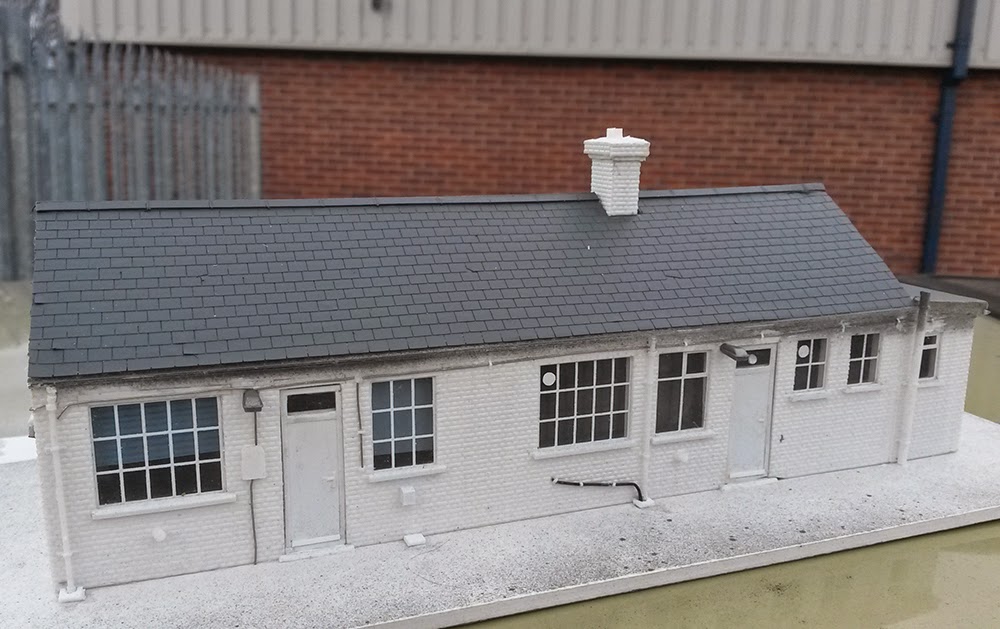 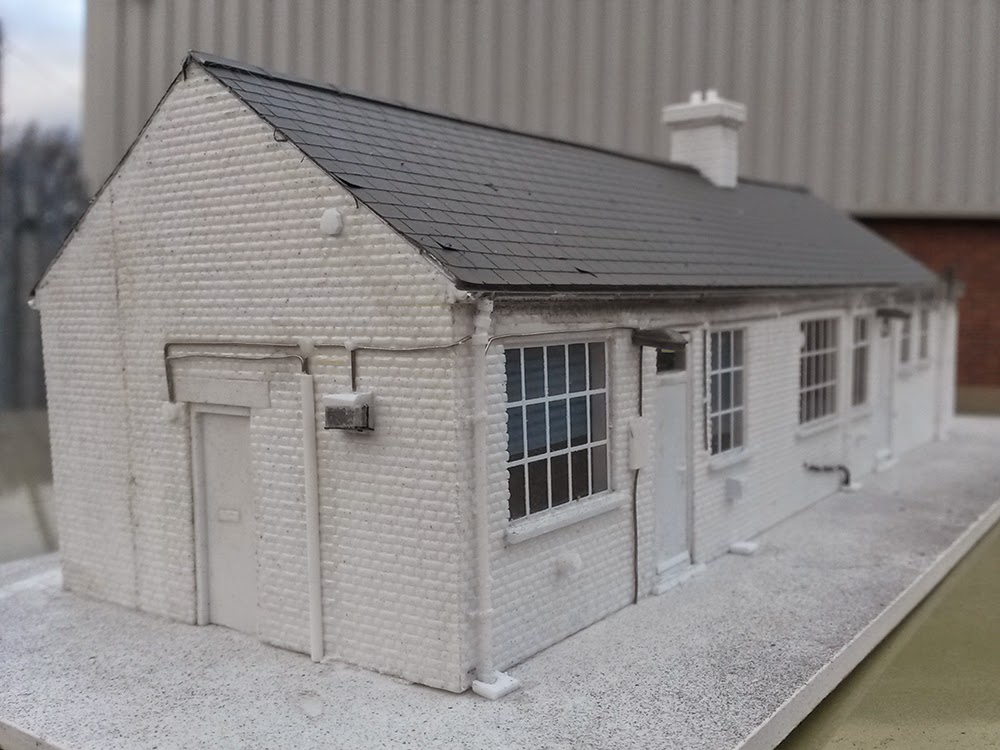 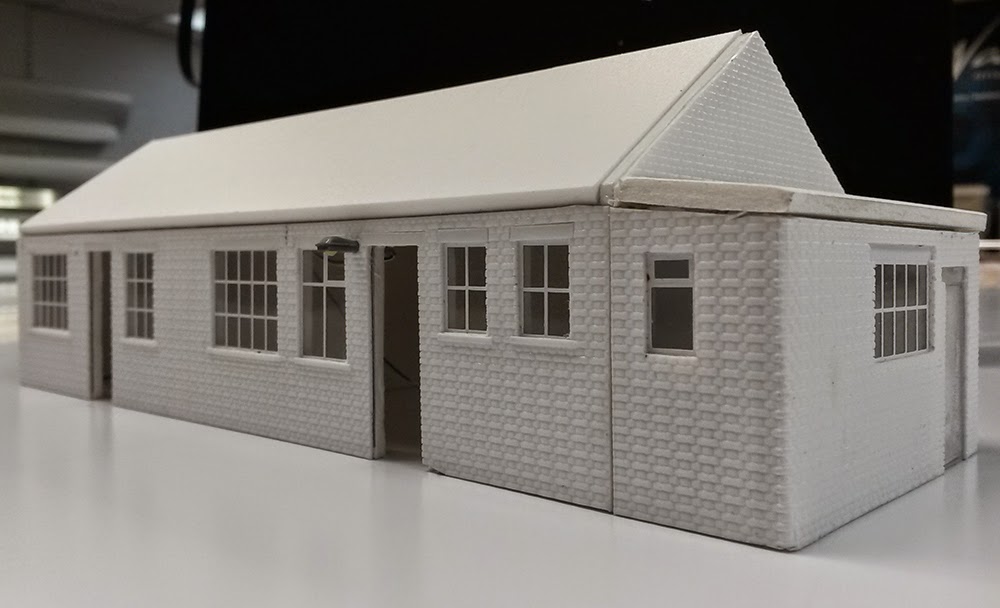 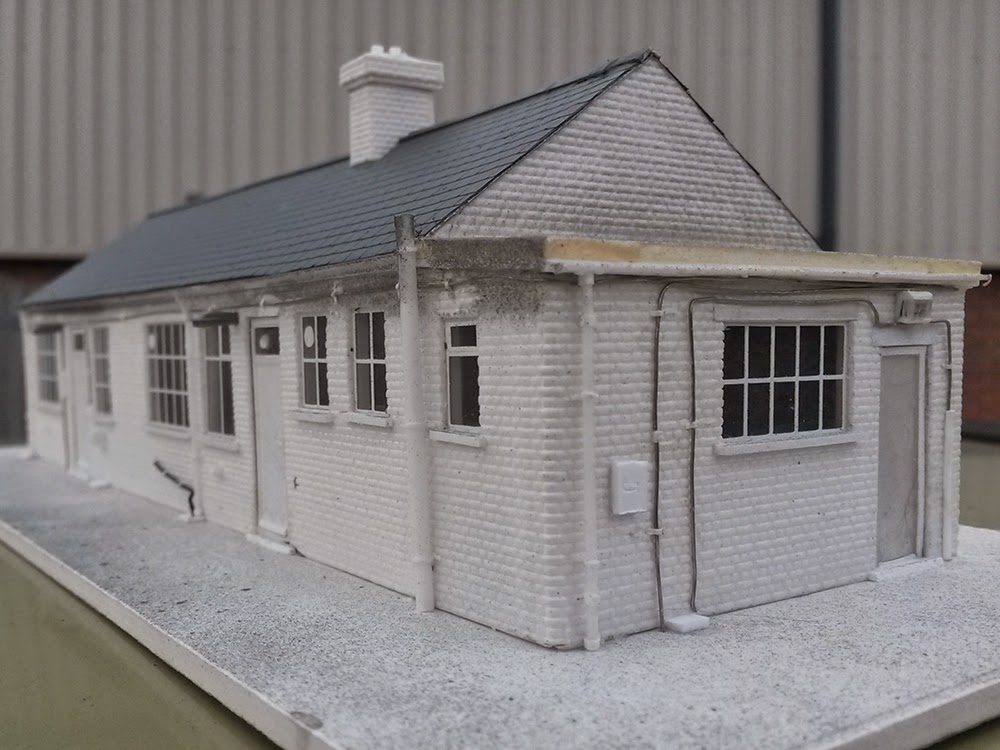 Like the Network Rail shed, the extension roof was "felted" with masking tape. Bulkhead lights were made up from pieces of clear plc and plasticard.

Painting was a mix of Humbrol acrylics and artists acrylics, with thinned grey enamel washed over the brickwork for the mortar courses. 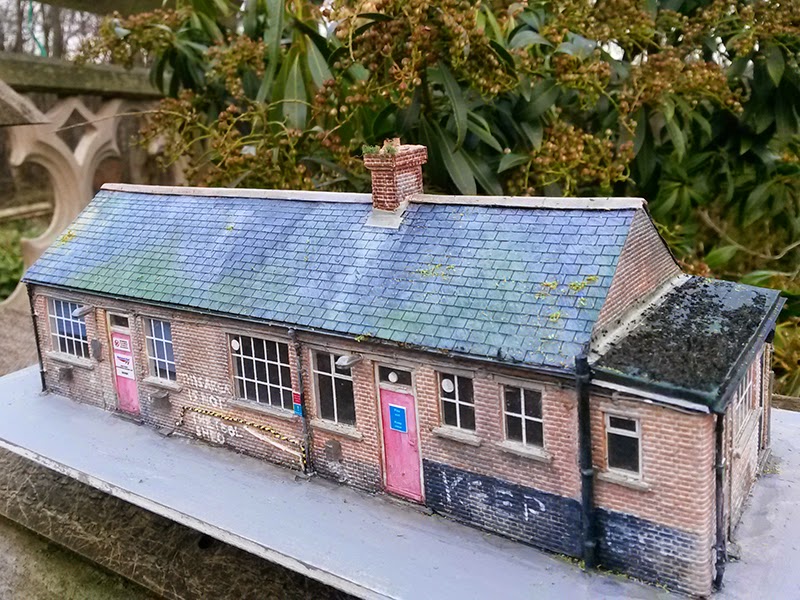 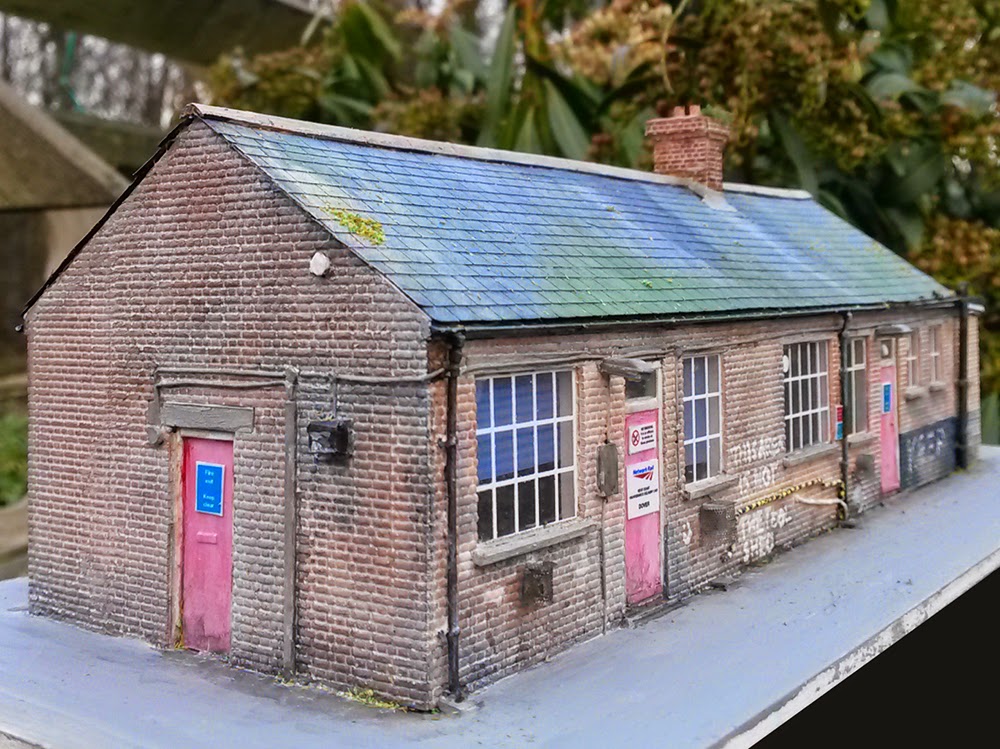 Finally, it was time to wire up those previously mentioned LEDs...

With my son eagerly watching, after successfully soldering on the supplied resistors, I wired them into the Accessories port on my Gaugemaster controller, flicked the switch, and in a majestic finale, nothing happened.

"Have you broken it Dad?" asked young Cameron.

"Hmm, I think I might know what I did wrong" says Dad, "Just go on upstairs and get your Pyjamas on whilst I disconnect it again"

"Don't switch it back on again until I come back down!" shouts the retreating 7 year old as he tears up the stairs"

When he reappears at the kitchen door, yours truly is grinning like a cheshire cat, "Turn the lights off then," says I... 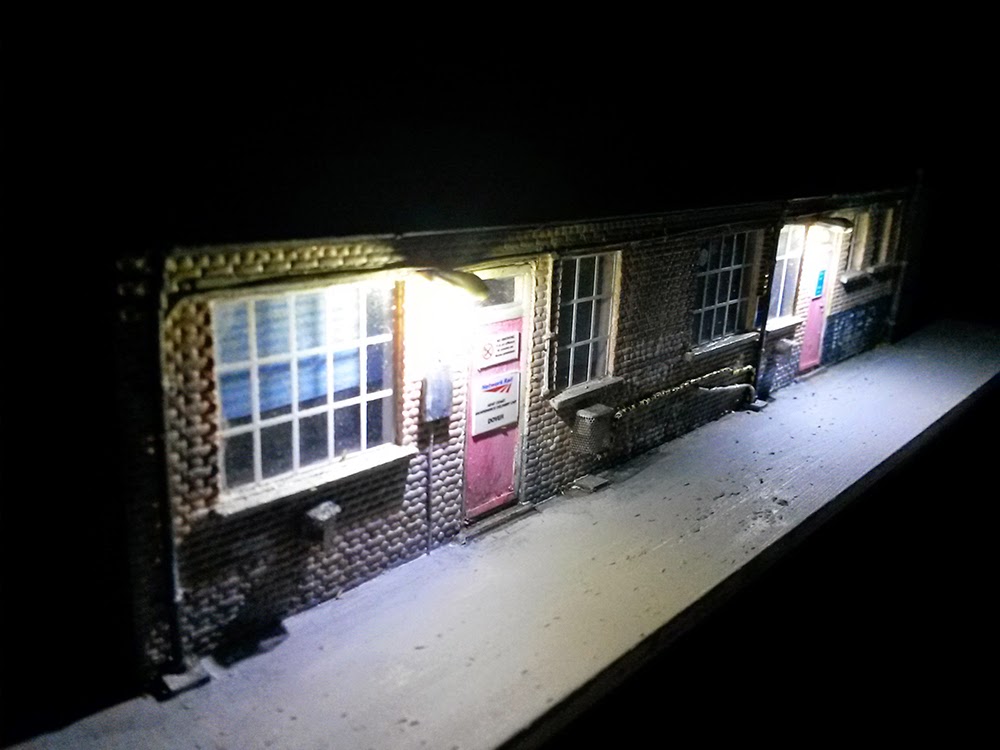 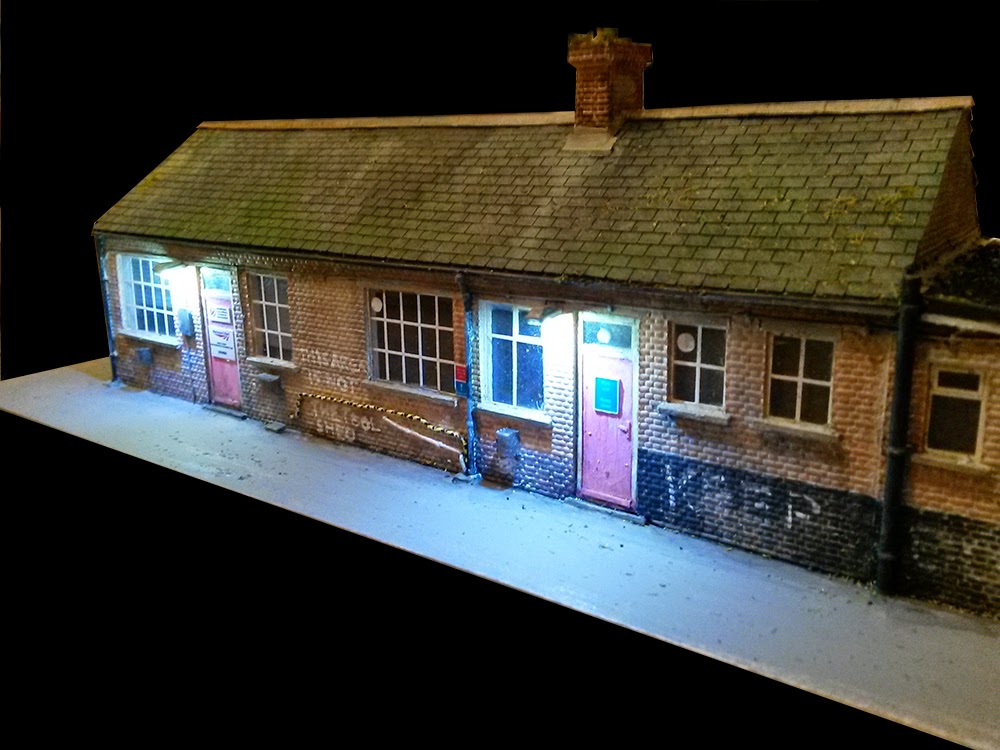 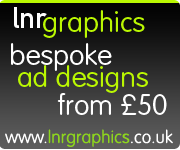 visit lnrgraphics for all your design needs